I’m going to finish this up lickety-split. After all, my recital was 2 months ago. But I just wanted to get a few things out there for people (yes, my mom) who wanted to read or who are having to generate program notes. 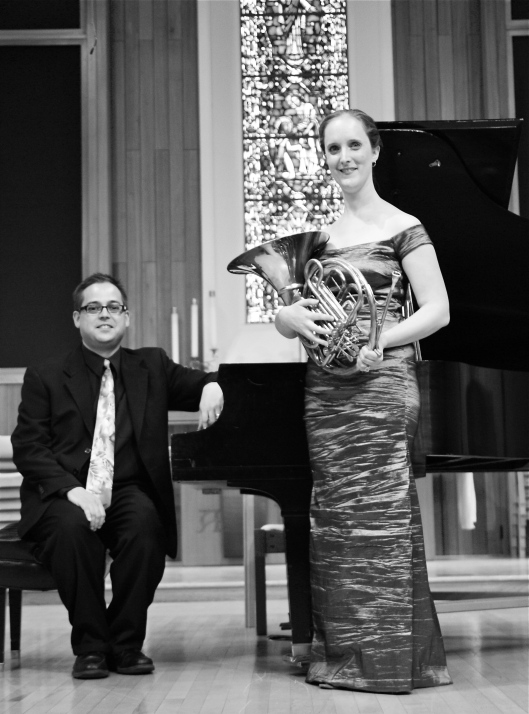 First off – I’m not a music historian. I have an extensive background in music history because I’m old, curious and have taken lots of classes but it’s not my area of expertise. By a long shot.

Secondly, I’m not a great writer. I used to love writing in high school, especially journal entries for my pre-university english class, but it’s been a while and I’m still finding my voice. And even though I’m a really fast reader, I’m a really slow writer. Like, glacially slow. I analyze every word and sentence and still end up making lots of typos.

Thirdly, I took all my own pictures. Or rather, I framed them out and then my husband hold the camera and press the button. I just ordered a remote control for my camera so I’m going to try some self-portraits in the coming weeks and months. As I wade through this photo stuff, I’ve come to the realization that I need really good head shots and I’d like to do it myself (DIM…haha).

Fourth – These program notes are probably not what you’d read at a professional chamber music concert/solo recital. Not that I’m not a professional but I also had to recognize that they were for an academic setting. So there is some language that I would never use if I were doing this outside the ivory tower.

Fifth – despite all of the above, I’m hoping that I still sound like me. And that even for a recital in an academic setting, that they still look pretty good (I used a template in Pages, if anyone is wondering).

So here they are:

Take a look, or a read, if you’d rather. I’d welcome comments about my writing as it’s something I’m trying to improve before I get to the meat of my dissertation in the coming year.

I really don’t mean this to be a food blog, but it seems like whenever I have time to write something, it inevitably ends up being about food.

But it doesn’t matter. Because this bread is REVELATORY.

This is what it looked like before I ate it: 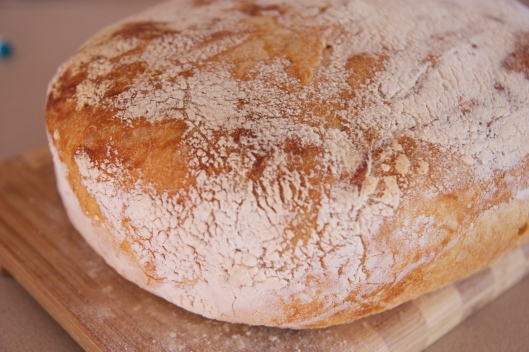 I don’t have an after photo. We ate the whole stinking thing up in a few hours.

I’d been avoiding the whole no-knead bread before, mainly because I couldn’t be bothered to buy the “right” kind of yeast. The instant stuff that people use in bread machines, if you must know. Lo and behold, I was cruising around the interwebs and found out that I could use my normal Active Dry stuff.

Recipe-wise, I followed the instructions on the Smitten Kitchen, but instead of using 1/4 tsp of instant yeast, I used 1/3 tsp of active dry. I also used bread flour and not all-purpose, mainly because we’re high and dry up here. Everything else I kept the same. And you should be forewarned, I still found this pretty messy and managed to get flour all over my newly cleaned stove top. But apparently sticky is good for the yeasty-beasties! Also, while it takes a lot of time, it’s not actually time-consuming. That being said, it’s a perfect, lazy-weekend-at-home kind of project.

Here’s the recipe, from smitten kitchen. And probably other places, too.

1. Mix together flour, yeast and salt. Add 1 5/8 cups water, and stir until blended; dough will be shaggy and sticky. Cover bowl with plastic wrap. Let dough rest at least 12 hours, preferably about 18, at warm room temperature, about 70F/21C.

2. Dough is ready when its surface is dotted with bubbles. Lightly flour a work surface and place dough on it; sprinkle it with a little more flour and fold it over on itself once or twice. Cover loosely with plastic wrap and let rest about 15 minutes.

3. Using just enough flour to keep dough from sticking to work surface or to your hands, gently (and quickly) shape dough into a ball. Generously coat a cotton towel (not terry cloth) with flour, wheat bran or cornmeal; put dough seam side down on towel and dust with more flour, bran or cornmeal. Cover with another cotton towel and let rise for about 2 hours. When it is ready, dough will be more than double in size and will not readily spring back when poked with a finger.

4. At least a half-hour before dough is ready, heat oven to 450°F. Smitten Kitchen says to put a 6- to 8-quart heavy covered pot (cast iron, enamel, Pyrex or ceramic) in oven as it heats. I only had a 2.5L casserole on hand and that’s why mine a little oddly shaped. When dough is ready, carefully remove pot from oven. Slide your hand under towel and turn dough over into pot, seam side up; it may look like a mess, but that is O.K. Shake pan once or twice if dough is unevenly distributed; it will straighten out as it bakes. Cover with lid and bake 30 minutes, then remove lid and bake another 15 to 30 minutes, until loaf is beautifully browned. Cool on a rack.

UPDATE: I tried dividing the dough in two so I could have two smaller loaves. It worked beautifully. You’ll just need a second casserole dish, but then the dishes don’t have to be as big as in the original recipe.

So apparently there was an election ’round these parts. Snort. I can’t truthfully say that since I’m not a US citizen, I wasn’t paying attention, but I can say it was nice to not live in one of the so-called battleground states. And it’s brilliant that we don’t have cable.

So instead of voting, I made a cake. The idea was to make a cake with no processed sugar. The intention was there. Unfortunately, the maple syrup was not. Once I got over the heresy of running out of maple syrup, I got a little creative and came up with something beautiful. And ever so slightly pink. 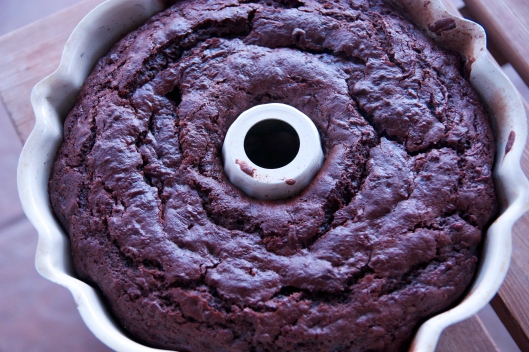 The recipe was adapted from Aimée over at Simple Bites, where she was running an unprocessed food series for the month of October. So naturally I found the one of the few things (probably) that was the least healthy. But it was yummy.

NB: My fave method of cooking beets for something like this is to wrap them in foil and roast for about 1 hour, maybe longer if your beets are really big, at 350F. Take them out when soft-ish (you can squeeze the foil to check) and let them cool. When you need to peel and grate them later in this recipe, you can do all that over the foil and clean-up is muy easy.

Pre-heat oven to 350F. Butter bundt pan and dust with cocoa. Grate beets with box grater and measure out two cups (I was a little over and didn’t sweat it). Transfer to a colander and let drain bit. Mix together butter, olive oil, honey and sugar until well blended. Add eggs, one at time, beating after each addition. Sift together dry ingredients and gently fold into wet ingredients. Do not over mix! Fold in beets until well-distributed and scrape into bundt pan.  Bake for 35-45 minutes, or until wooden skewer comes out clean. 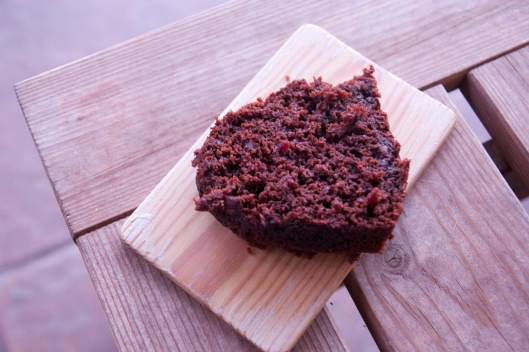 The Verdict: Rich, earthy and comforting. Yes, you can taste the beets but I didn’t find it overpowering. For for my taste, I’d rather have maple syrup instead of so much honey, so at some point I’ll follow the original a bit more closely (we’re dry and high here in Desert Town, USA, so I usually have to alter things because my dry ingredients are, well, drier).

You can find the original recipe here.

I’ve been MIA for a bit around here but I thought I’d update the audition info, since I forgot to do it at the beginning of the month.

Here are the October AFM audition ads for horn:

Resume Date: November 2, 2012
Audition Date: February 23-25, 2013
Salary/Benefits: 2012-13 Salary: $69,000.36 + EMG (Signatory to the IMA), Benefits and  7.63% AFM Pension
General Information: Employment begins at a mutually agreed upon time.  Repertoire will not be given over the phone. No phone calls please.
Contact Information: E-mail resume to: auditions@nashvillesymphony.org Or post two copies of your one-page resume to: Audition Coordinator The Nashville Symphony One Symphony Place Nashville, TN 37201-2031 Visit our website for more information: www.nashvillesymphony.org/auditions
Email: auditions@nashvillesymphony.org
Website: www.nashvillesymphony.org
Hopefully I be posting a bit more regularly this month. I’ve a got a bunch of things going on, but I’d like to attempt to have some continuity. Or at the very least, some cake recipes.